Ditch your SONY FS7 grip and never look back. 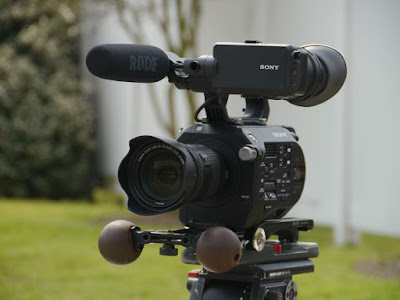 Found this on the SONY site while I was exploring the durability issue that the FS7 grip is having in the field. JPNola is using the two 2 Sphere Grip, our Triggered Grips also have the ability to on/off the SONY FS7.

"Solution"- Ditch the entire extension arm / control grip thing altogether and never look back.
I realize that isn't the solution you were looking for and it doesn't address the shoddy build of the control grip. But it is a solution that could save you a lot of headache, bring many advantages, and even improve your shooting.
About the only thing that the control grip provides that cannot be accomplished without the grip is simultaneous focus and iris riding. I found that it was rare that I needed to do both at once since the iris change is stepped and undesirable for in-shot exposure adjustment. Besides, being that the arm / grip is such a pain in the rear and creates so many problems, giving up simultaneous focus / exposure change was a trade-off I was willing to make.


The happy bonuses off ditching the arm are :
* camera placement is no longer limited by the arm. I can perform shots where the camera lens just barely clears an object. I can perform shots where the camera body is on the ground or on the hood of a car. No arm sticking out from the bottom of the camera to impede those camera placements.
* I can place the upright on a flat surface when not in use. No need for a second arm. No more having to lay the camera on its side.
* no more problems when mounting to a tripod. No having to temporarily reposition or remove the arm.
* no more concern over tearing up the cable for the control grip. Less cabling on the camera overall and that makes for less of a "franken-camera" / "C300" look. The camera is more "clean" without the arm and cabling to the grip.
* going without the arm shed weight. Weight that wasn't helping to stabilize camera shots. Weight that wasn't positioned aft of my shoulder- the only place where the Fs7 needs for additional weight.
* no more having to reposition or remove the arm in order to put the camera in its camera bag.
* no more one hand up, other hand down shooting position. Both hands are now at the same height, just like shooting with a traditional broadcast tv camera or motion picture camera. Having both hands at lens height makes you feel more part of the camera, more connected to the lens and thus to the shot.
Quit the grip and you will likely feel better for it. It was a bad habit to begin with. :smileylol:
-JPNola
Posted by Unknown at 7:27 AM